A WRITER'S STAY IN VICTORIA'S SPECTRAL AUTUMN by Harrison Kim 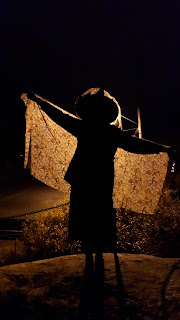 How about a writing stay in haunted Victoria, B. C.?  If you need inspiration for tales of the supernatural or the ghostly, this old town has a wealth of weird and eerie places to explore.  Immerse yourself in Victoria’s Samhain spirit to tickle up shivery influence for new story ideas.  Craigdarroch Castle, home of coal barons the Dunsmuirs, is a great place to start.  The most encountered family ghost there is that of Joan Dunsmuir, the patriarch’s wife.

Apparently Joan’s been seen from time to time stepping down the main staircase in a ball gown.  That’s only one of the castle’s supernatural phenomena. If you smell candle wax, and there’s no candles burning, no worries.  It’s merely an odd gassy ghost waft experienced by many visitors.  Eerie piano music sometimes echoes through the halls, though the castle never had a piano.  Craigdarroch was built on the dark wealth from the Dunsmuirs’ coal mines.  It is now a National Historic Site, fully restored to its Victorian glory with gargoyles, turrets, exotic wood panelling and stained glass.  Lots of corners to peek around and catch a glimpse of the spectral Joan D.

Hatley Castle is the next haunted castle on the Victoria list.  It’s out in the suburb of Colwood, on the site of Royal Roads University, and was completed in 1908, again by the Dunsmuir Family, who apparently haunt all their creations.  My research finds that Hatley Castle phantoms have a weakness for banging pots and pans and pulling blankets off the beds of sleeping guests.

For ghost touring author accommodation, an appropriately mysterious place to stay would be the Fairmont Empress Hotel, a huge hundred year old Gormenghast like structure looming over Victoria’s waterfront.  One of the restless ghosts is a maid who won’t stop cleaning, very useful for a hotel trying to make a profit.  The hotel’s architect, Francis Rattenbury, is supposed to walk the halls hitting his cane against the woodwork.  Not so good for light sleepers, but then, you’re here to see ghosts! When you hear the knocking, open your door and say hi to the architect. Some say Rattenbury also haunts the B. C. Legislature,  just across the street.  He’s seeking recognition for planning the edifice, according to phantom experts.

Don’t miss the guided ghostly walks around Victoria.  These run from May 1st until October 31st, and often feature historian John Adams, who has vast expert knowledge of uncanny Victoria. He and his confederates pull on skull caps and ghost robes and lead groups of curious acolytes to various spectral sites around the downtown area.  Often, locals will listen in to tour guides talking about the screaming doppelgänger of Beacon Hill Park, or the long ago executed phantoms buried under the Maritime Museum of B. C. A conveniently located hanging tree grew here a hundred twenty years ago, when the place was B. C.’s Supreme Court.  After executions, the bodies were dropped into nearby graves. 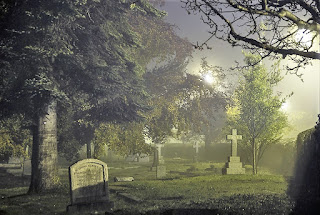 Historian Adams sometimes leads tours with the Old Cemeteries Society of Victoria.  Every Sunday at Two P. M. the Society meets at various graveyards around the city for interesting guided walks among the tombstones.  Ross Bay cemetery is the most well-known and scenic necropolis, designed in Victorian style with carriage ways bordered by oak trees and marble tombs.   Views of the Olympic Mountains appear in the distance. Herds of feral deer munch graveyard grass.  The bodies of artist Emily Carr and B. C.’s first Governor Douglas lie here under autumn’s red and orange leaves.  Emily is supposed to haunt several places in Victoria, including Room 115 of ye olde James Bay Inn, St. Anne’s Academy, which is a hundred year old former Catholic convent, and the soon to be rebuilt Customs House.  She’s a busy ghost.

Why so many specters, appearing sometimes in two places at once?  Apparently, rocky cracks, or “ley lines”, in the earth’s surface beneath Victoria give off powerful magnetic energy that encourages phantasms from the shadowlands, and enhances their influence and scope.  The historical range of the ghouls covers from ancient to modern times.  One story tells that around Laurel Point, in James Bay, indigenous people buried their dead in boxes in the trees.  After settlers chopped down the trees to build their houses and farms, upset ghosts screamed and set fires.  Who can blame them?

From October 20th to 30th the Old Cemetery Society schedules ghost bus tours past many haunted sites, very convenient for the writer who wants the complete fright experience without a lot of footwork. Reservations are recommended.

For a lighter change of pace, a visit to the various pumpkin farms around Victoria is fun.  In fact, the event is called Pumpkinfest.  Galey Farms features the festival of fear, featuring the cornfield of horror.  Sounds like a blast!

Victoria immerses itself deeply into the spirit of scary October. On Oak Bay Avenue, dozens of pumpkin carvings of faces from TV personalities to Frankenstein and Prime Ministers can be seen at “Pumpkin Art on the Avenue.”  After you leave this exhibition, don’t go by the Oak Bay Golf course unless you like being single.  An apparition, believed to be a woman known as Doris Gravelin, might waft in front of you.  Folks that see her apparently never marry.

Downtown, there’s an event called “Wicked Victoria,” which features a car free zone on Government Street, with live Hallowe’en music and a market.  Many people dress up in their favorite costumes for this event.  Sometime each October, there’s also the “Zombie Walk.”  Better leave what that’s all about to the imagination.  Let’s just say, don’t take the kids.

For a writer seeking inspiration for horror or ghostly tales, there’s a lot to recommend.  I’d urge prospective travelers to read the book “Victoria’s Most Haunted: Ghost Stories from B. C.” to get some background and help draw up an itinerary.  Have fun writing up your horror mysteries! 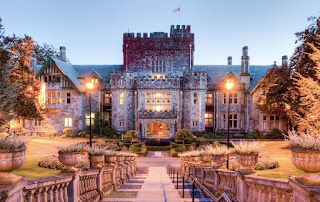 at October 11, 2019 No comments:
Email ThisBlogThis!Share to TwitterShare to FacebookShare to Pinterest
Newer Posts Home
Subscribe to: Posts (Atom) 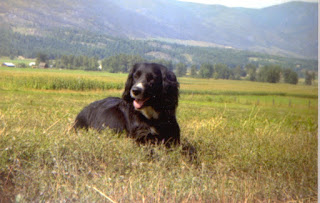